The Dangers of Drunk Driving

In the United States, car accidents are the leading cause of death for people between the ages of one and fifty-nine. Almost 30% of crashes with fatalities involve a drunk driver. 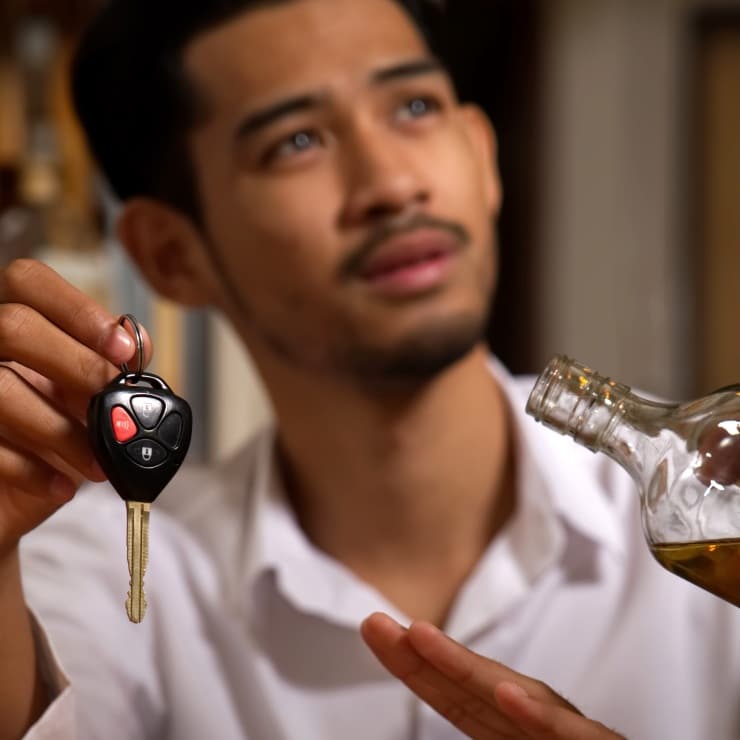 The Dangers of Drunk Driving

In the United States, car accidents are the leading cause of death for people between the ages of one and fifty-nine. Almost 30% of crashes with fatalities involve a drunk driver.

The Definition of Drunk Driving

DUIs apply to any motor vehicle, such as cars, motorcycles, golf carts, or boats. Cars and motorcycles are the most talked about concerning drunk driving because they are the most common on public roadways. They also pose the greatest threat.

Even if you are below the legal limit, driving with alcohol in your system can still be dangerous. Alcohol can start having side effects in your system that impair driving abilities with a BAC as low as 0.01 percent.

Alcohol in your system affects your ability to respond to situations. At any given time on the road, there are many hazards drivers must react to, such as animals, the car in front hitting their brakes, debris flying off a truck bed, or pedestrians.  In normal circumstances, we often process hazards quickly. Our mind reacts fast enough to stop or swerve around them.

With alcohol in a driver’s system, it takes longer to process situations. With a delay in reaction time, they might be able to avoid hazards quickly enough, resulting in accidents or injuries.  Additionally, alcohol affects concentration. It can make you easily distracted or struggle to focus on what’s in front of you. This might lead to other forms of distracted driving, like fiddling with the radio, texting, or talking on the phone.

In combination with more disorganized thoughts, confusion, and a harder time multi-tasking these side effects of alcohol make driving a dangerous activity.

Being under the influence of alcohol affects the body’s nervous system and impairs motor skills.
A drunk driver has less hand, eye, and foot coordination—all vital skills for driving. New research shows that some coordination is impaired more than 20 percent with blood alcohol levels as low as 0.015 percent.

A driver under the influence will struggle with basic coordination skills. When performing sobriety tests, law enforcement officers test hand-eye coordination to help determine if someone is driving under the influence. They test this by having the driver walk in a straight line, follow their finger with their eyes, or balance on one foot.

A driver who cannot perform these skills on their feet is in even more danger on the road. Impaired hand-eye coordination causes drivers to struggle to put their keys in the ignition, swerve on the road, and have trouble with steering.

Intoxication affects the part of your brain responsible for judgment and rational thinking. Alcohol lowers inhibitions and causes individuals to make decisions without considering the consequences.

Without the ability to responsibly judge situations, someone who has been drinking may decide that they are okay to drive. When driving without a clear head, you’re less able to predict potential problems on the road.
Drinking also causes memory lapses, or blackouts, where your brain doesn’t transfer short-term memories into long-term memories. When this happens, typically not until your body reaches a BAC of 0.16 percent, you may not be aware of your actions.

If you’re driving during a blackout state, your judgment is even more impaired. Not only do you risk accidents, but you risk not remembering important details should something happen while you’re behind the wheel.

4. Increased Chance Of Being Involved In An Accident

One of the biggest drunk driving dangers is the increased likelihood of being in a car accident. In 2017, a study by the National Highway Traffic Safety Administration determined that every two minutes someone is injured in an accident involving a drunk driver.

Drinking and driving increases the risk of accidents due to impaired motor skills, less concentration, slow reaction times, decreased vision, and poor judgment. These side effects put the driver, potential passengers, other vehicles, and pedestrians at risk.

Drunk driving isn’t a risk worth taking. Whether you’re pulled over, in an accident, or damage your vehicle, the consequences of driving while drunk are severe.

You May Harm Yourself or Others

In a car accident, there is a chance of injury or death. The drunk driver, passengers, bystanders, and drivers of other vehicles are all at risk.

Drunk driving facts show that the 4.4 million people who were involved in road accidents each year had injuries severe enough to need medical attention. As for accident-related fatalities, one-third of the accidents involve drunk drivers.

If you’re driving drunk, you’re putting lives at stake. If you get into an accident where someone is injured or killed, your actions might weigh on your conscience. If you’ve been battling alcohol addiction, the trauma of the accident can make you more likely to turn to alcohol for comfort.

You also risk facing legal consequences that can change the trajectory of your life.

Every state has laws that prohibit driving under the influence of alcohol. In most cases, the consequences are severe. If a driver is driving over the legal limit, they receive a DUI or DWI charge.

A driver charged with a DUI may have their license suspended. First offenders can lose their license for 30 days up to a year, depending on the state. If you’re a repeat offender, you’ll face a longer suspension or have your license revoked permanently.

In some states, even first-time offenders must serve jail time and spend up to a week in jail. Repeat offenders are more likely to serve time after driving under the influence.

Those convicted of driving while intoxicated are often ordered to install Ignition Interlock Devices(IID) in their vehicles. This device is like a breathalyzer and prevents the car from starting unless the driver blows with alcohol-free breath. It will also ask for breath samples at random times once the car starts and records the results.

In addition, drivers charged with DUIs must pay expensive fines. These fines are a minimum of $500 in most states and drivers also have to cover any court costs.

When you receive a DUI, the financial repercussions can be great. You may find yourself faced with hefty fines, expensive legal fees, or bail money.

If an accident took place, the financial consequences are even greater. You will have to pay to repair your vehicle and cover property damage if you run into anything during the accident.

With a damaged vehicle or a suspended license, your livelihood can take a hit. If you have no other means of transportation or help to get to work, you might be unable to show up for your shifts. For people already struggling to get by, a DUI can be detrimental.

If the accident involved another person or vehicle you may be responsible for their medical bills and vehicle damage. In the event of serious injury or death, you’ll have to appear in court and will have to pay for lawyer and court costs.

Every day in the United States, around 29 people are killed as a result of drunk driving accidents. In 2018, 28 percent of all accident-related fatalities involved a drunk driver.

Among drivers with over the legal BAC in their system in 2016, 27 percent were between the ages of 25 and 35. The second group, ages 21 to 24, came in at 26 percent. In the same study, 25 percent of fatal motorcycle accidents involved drivers who were over the legal alcohol limit. 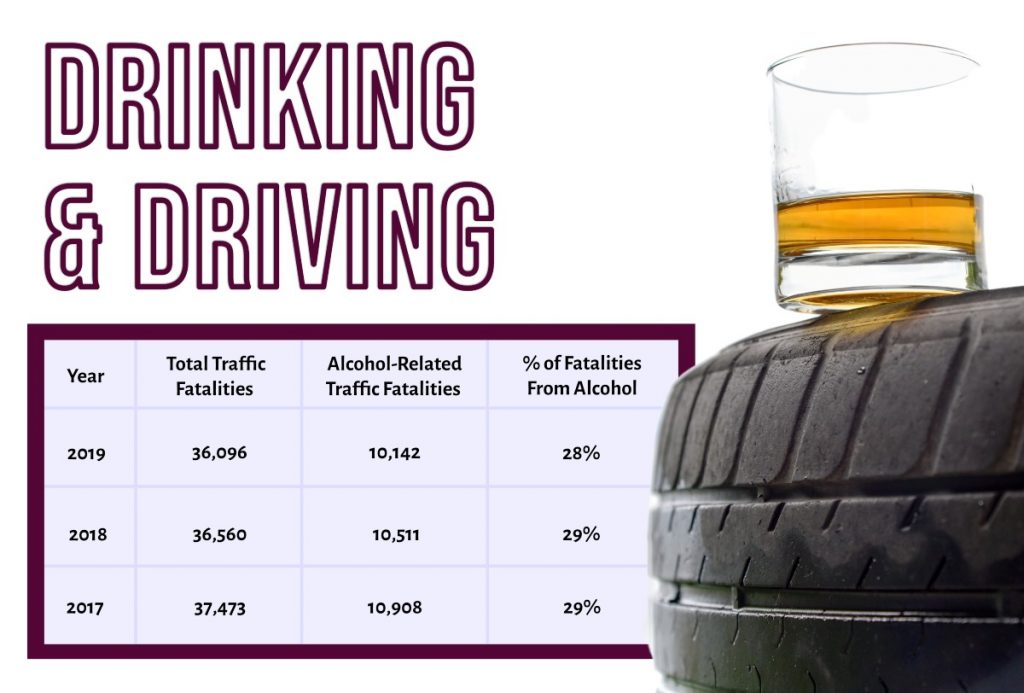 There are several resources available to keep ourselves and others safe from the dangers of driving while drunk. The most important preventative method is to never, under any circumstances, drink and drive.

Have A Designated Driver

If you plan on going out and having a good time, but know you’re likely to overindulge, find a designated driver. A designated driver is someone who abstains from drinking to drive the other people in the group safely.

Your designated driver can be a friend in your group or a family member willing to come to pick you up. Plan ahead so you already have a designated driver in place. Any surprises might lead you to consider drinking and driving at the end of the night.

Call For A Ride

Now, more than ever, there are plenty of services that offer a ride if you don’t have a designated driver. If you didn’t plan ahead but are too drunk to drive, call a friend, family member, or ride-share service.

Ride-share services, like Uber or Lyft, can have someone there to pick you up within minutes and take you to your destination. All you need to do is have the app on your phone.

They are an effective option when you don’t have anyone else to call. You can even use these services to return to your vehicle the next day once you’ve sobered up.

If you’re in a situation where you know you have to drive home, it’s vital to be self-aware. Know your limits when it comes to alcohol. Hand over your keys to a trusted friend if you know you have a habit of being irresponsible when you’re drinking.

Consider why you’re drinking so much when you go out. Do you have social anxiety? Has it become a habit? Try having some sober nights out or practice moderation by occasionally volunteering to be the designated driver for your friend group.

If you want to drink, don’t have more than a couple and, if you do overindulge, switch to water. Give yourself at least a few hours before hitting the road.

In general, if you have doubts about your ability to drive safely, you shouldn’t be driving. Stay where you are for the evening or call for a ride if you need to leave.

If you are suffering from alcoholism and suspect that may be the root of your desire to drive drunk, it’s time to seek professional help.

Alcoholism is a chronic brain disease characterized by uncontrollable drinking and depressive thoughts. It can lead to poor judgment and dangerous behavior.

There are several programs available to help those struggling with alcoholism. Alcohol rehab treatments include alcohol detoxing and inpatient or outpatient programs. You can also join support groups like Alcoholic’s Anonymous (AA).

Remember The Dangers Of Drunk Driving

The next time you think about getting behind the wheel after several drinks, consider the dangers of drunk driving. The consequences can be severe and have the ability to change the course of your life.

Keep fellow drivers, passengers, and pedestrians safe by getting a ride from a sober driver or staying put.  If you or a loved one are struggling with alcohol, you can get help.  Contact us today to get on the road to recovery.